The EU and the Balkans in the 21st Century 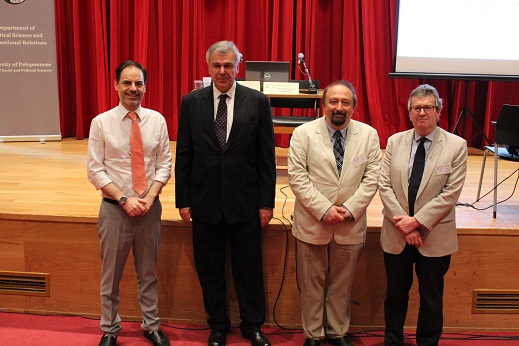 The international conference titled “The EU and the Balkans at the End of the Second Decade of the 21st Century” organized by the Department of Political Science and International Relations and the Jean Monnet Centre of Excellence of the University of the Peloponnese in cooperation with the National Centre for Research on Europe of the University of Canterbury (New Zealand) and the Konrad Adeanuer-Stiftung in Greece, was successfully completed during the 4th and 5th of June 2018, in the city of Korinthos, Greece. The conference brought together participants from Greece, the Balkans, Europe and beyond, to discuss the issue of EU enlargement towards the Western Balkans, ODA to South Eastern Europe as well as the EU intervention in the Greek economic crisis. Other subjects analyzed included issues of peace and security, democracy and stability in the wider region, including the relation of Turkey with the EU.

The conference included keynote speeches by Professor Ludger Kühnhardt from the Center for European Integration Studies (ZEI), University of Bonn, Germany on the EU-South Eastern Europe relationship as well as of Dr. William Bartlett, Senior Research Fellow, European Institute, LSE on the political economy of EU assistance to the Western Balkans. In addition, the conference included a series of panels discussing various aspects of the EU relationship with the South Eastern Europe and the Balkans.

The conference was attended by numerous academics, researchers and undergraduate and postgraduate students initiating interesting and fruitful discussions on the subjects under focus.